Death of a Geek: John McGarr

This is not a symbolic death, like a comic-book geek has been reformed  or anything.  Rather, it's the actual loss of a really great guy who was killed by a drunk driver.  This is the second obituary I'm writing from Kevin Geeks Out About Werewolves; in December I'd eulogized actor-writer Paul Naschey here.   Today I'm writing about filmmaker John McGarr.

John recently produced House of the Wolfman.  He also played the creepy manservant, Barlow (pictured, right.)  The film re-creates the look and feel of a 1940's monster movie, it even boasts a connection to the original Universal Monsters by casting Ron Chaney (grandson of the original Wolf Man, Lon Chaney Jr.)

Last week John attended the HorrorHound Weekend in Indianapolis.  According to a convention organizer, John and his brother Eben were there working on a documentary.  On Thursday morning, he was walking to breakfast when a car swerved out of the traffic lane, hitting and killing John.

When we did Kevin Geeks Out About Werewolves, I'd emailed John requesting clips.  He sent us the trailer (below).  We closed the show with his footage, it played beautifully and brought the night full circle.  Afterwards a lot of people wanted to know how they could see the whole movie.

He also sent me this video, shot in the style of a 1970's MEGO commercial.  John was a guy who clearly loved what he loved and was making stuff for fans like me. 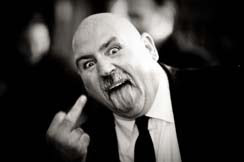 We never met in person, but I was glad to know him by phone and by email.  When I'd suggested he talk to people at the 92Y Tribeca to arrange a screening, he refused.  John said he wanted to his New York premiere to take place at a Drive-In.  He'd already started researching it, and I hope the filmmakers make it happen.  In March, House of the Wolf Man had been picked up for world-wide distribution by Taurus Entertainment.  (They're planning an October release, naturally.)  We lost a good geek, but his labor of love lives on...

Email ThisBlogThis!Share to TwitterShare to FacebookShare to Pinterest
Labels: House of the Wolf Man, John McGarr

Kevin Geeks Out About Monkeys (a recap) Kevin Geeks Out is a monthly video variety/comedy show I host at the 92Y Tribeca.  This is a recap of the February 2010 installment: Kevin Geeks Out About Monkeys.


We kicked off the show with a hot-mix of some favorite monkey movies and TV shows, including clips from The Mighty Gorga, Trog, Escape from the Planet of the Apes, Battle for the Planet of the Apes, and an actual film called FUNKY MONKEY which stars Matthew Modine as a guy who travels around the country with a super-talented chimp.  Apparently they're just about to leave town when they are roped into helping a kid win the big game.  (I'll admit, I didn't watch the entire movie, just the football stuff.)

Then I did a lengthy study about the legacy of King Kong, from the sequels to the Toho reboots, the remakes, the knock-offs, the universal studios ride, the video games, and so on.  [Fun-Fact: the 1933 original was followed by a quickie sequel called Son of Kong.  Now the first film came out in April of '33, the sequel premiered that December.  This is probably the quickest turn-around is sequel-making.  But 50 years later that record was beat when a 1984 blockbuster attempted to quickly cash in on a sequel before the fad ended.  Can you guess the movie?  It was Breakin' (released in May of '84) immediately followed by Breakin' 2 (which was released in December, presumably to be eligible for the '84 Academy Awards.)]  We also covered the Toho reboot, including King Kong Vs. Godzilla and the film where Kong fights his robot doppleganger, Mechani-Kong (below King Kong Escapes) All this, plus: King Kong Bundy, Donkey Kong, King Kong cocktails, and profiles of 1970's knock-offs including Queen Kong, A*P*E, and King Kung-Fu. We showed bits from Universal studios' "King Kong Experience" ride and commercials for Nebraska's King Kong fast-food restaurant. (don't worry, they don't eat gorilla meat.) For the sake of keeping this a family show, we did not screen anything from Kinky Kong or Babes of Kong Island. 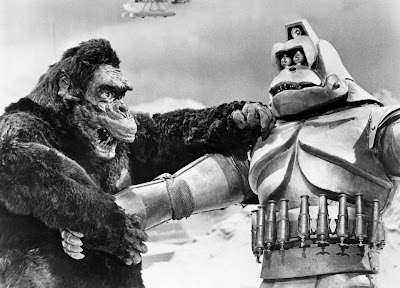 Next up, a Kevin Geeks Out favorite -- Professor Geoff Klock did a close-reading on a single issue of the Justice League Comic Book that centered around Gorilla Grodd. Klock argued that the adventured celebrated the weirdness of his adventures -- the kind of stuff Christopher Nolan would never put in a movie -- like Batman taking his space-ship to a distant planet where he kicks a gorilla in the nut-sack.  Viva Comics! 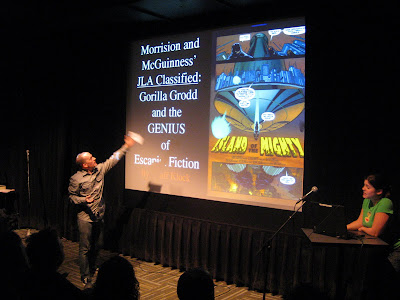 This was followed by another video block, celebrating REAL monkeys in film, including Lancelot Link: Secret Chimp, old movies of a monkey wedding and this classic by Tom Stern (a film which is said to be a favorite of Ethan Coen.) 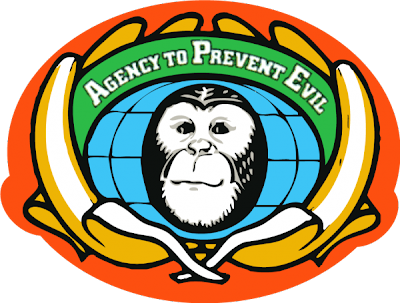 Carrie McLaren (producer of Brooklyn's Adult Ed Lecture Series) delivered an eye-opening lecture about the history of Bob and Mae Noell's "Gorilla's Ark", a mid-century traveling side-show where audience members were invited to win money by boxing chimpanzees. (Not surprisingly, a lot of the volunteers were drunk.  Some things never change.) We do not have footage of Carrie's lecture, but you can see some of her other primate lectures here, including "Why You Want a Monkey" and "How to Raise a Chimp in Your Home.") 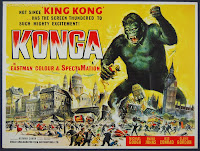 After that, KGO super-producer Meg Sweeney Lawless introduced "The Kindest Cut" a recurring segment at Kevin Geeks Out, where Meg and her husband Jay cut-down a feature-film into an abridged version with the best (or the worst) parts of genre movie.  This month Meg shared KONGA -- a bizarre British Kong-like story that featured flesh-eating plants, dummy-deaths and the guy who played Alfred the Butler in Tim Burton's Batman.  (NOTE: Less than a month later, an audience member hosted her own KONGA screening party in Boston, where people dressed up for the film.) 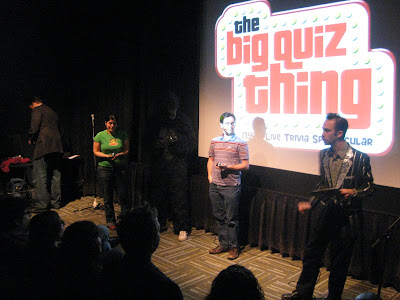 Noah Tarnow was up next with a primate-themed edition of his Big Quiz Thing -- three audience members were brought up to compete (including one guy in a gorilla suit!)  Noah occasionally stumped his contestants with questions about monkey-music, movies and history. 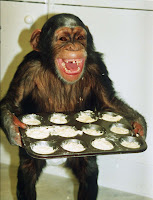 The contestants won some deluxe prizes, including: passes to the Congo Gorilla Forest at the Bronx Zoo, passes to the upcoming Curious George art exhibit at the Jewish Museum, and a signed DVD of the movie KONGA.  (signed by me.)


Then it was time for a snack break!  Our audience was treated to Envirokidz Organic cereal: GORILLA MUNCH.  The gluten-free treat was provided by Nature's Path Organic foods.


While the audience was crunching and munching, M. Sweeney Lawless returned to do a bit with me about the theory behind putting gorillas on comic-book covers.  You can see the cover art and read the bit HERE  (or just scroll down to the next blog entry.)  It's worth noting, I discovered that my favorite cover, was in fact a reprint. Check it out and compare the two covers side-by-side. 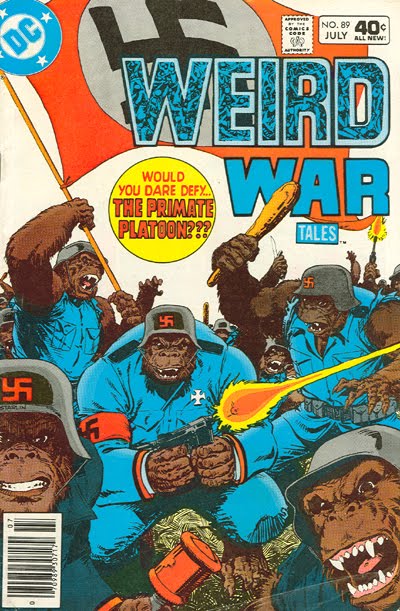 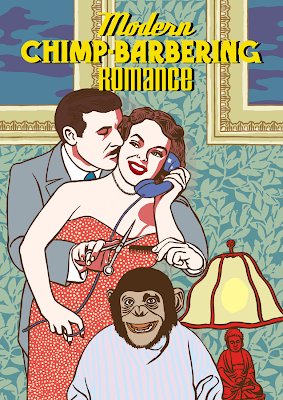 The evening was packed with videos of guys in gorilla suits, cartoon chimps and real-live monkeys.  Animal Lawyer (but not an actual animal who is a lawyer) Cori Herbig stepped up and told some true tales of monkeys in movies.  I'd noted after the Lancelot Link clips that the male chimps in that series had been castrated before production began, to keep them from humping people and females.  Well, that's just the tip (ahem) of the iceberg.  Cori talked about some actions being taken to protect performing animals -- or to keep them out of film and tv entirely.


I love to showcase "spoken nerd" poetry whenver possible -- and initially Ernie Cline was scheduled to be part of the show.  Being a hot-shot screenwriter, he was called to L.A. and could not attend, but he did share this video favorite:

Then it was time for the surprise gift of the evening.  Proceeds from Kevin Geeks Out About Monkeys were used to adopt this little darling -- Ubwuzu.  He's a two-and-a-half year old male, the only child of Mitimblili and one of the youngest in his group of mountain gorillas being studied and protected by the Dian Fosey Gorilla Fund's Kaisoke Research Center.  I have to admit, I'd wanted to change his name to baby Milo (like the infant chimpanzee in Escape From the Planet of the Apes -- but just look at him!  He's such a Ubwuzu.  Right? 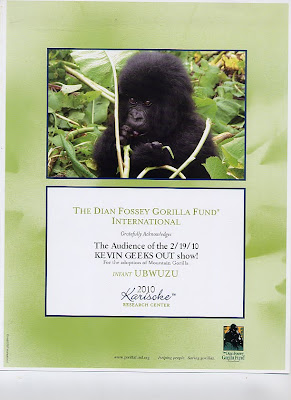 Following the adoption announcement, we showed a video of Jane Goodall wishing happy 75th birthday to the chimp who played Cheeta in the Tarzan movies.  And then we handed out copies of the adoption notice to audience members -- because we are all Ubwuzu's parents now.


And no show would be complete without a teaser for the next month's show:  (note: this trailer was edited by Matthew Glasson, a longtime KGO favorite who is co-hosting this very show!)

KEVIN GEEKS OUT - BONUS MATERIAL: (stuff not actually seen in the show)


Gorilla at Large Trailer. Note: the actor in the monkey-suit also played the title role in ROBOT-MONSTER and the “MUGATO” (white horned ape) in Star Trek.


Another one of Tom Stern's Mokeyed Movie: Planet of the Humans

Here's a hilarious short by Steve Martin. (Sometimes I forget how funny he is. It's understandable.)

From the TRAILERS FROM HELL website, here's John Landis on Mighty Joe Young and director Mick Garris on Son of Kong.
Enough talking – here’s Chimp Karate!
Two weeks after the show, I found this old bootleg DVD of mine with 1960's Superman cartoons. Here's the Man of Steel taking on the Ape Army of the Amazon
SITES DEVOTED TO GORILLA COMIC BOOK COVERS: Here's one
and another
and yet another
and still another
News report about this Japanese monkey waiter.
Footage of drunk monkeys in the Carribean.
A link to the trailer for LINK (a 1986 horror movie that pre-dates Monkey Shines)
Posted by Kevin Maher at 12:29 PM 2 comments: