Kevin Geeks Out with Pete & Alex from STAR WARS MINUTE 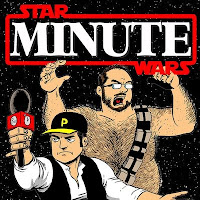 At the first-annual Brooklyn Brain Jam I had the pleasure of interviewing two inspiring nerds -- Alex Robinson and Pete the Retailer. These guys have been podcasting daily about the Star Wars Saga for close to 3 years. (Visit StarWarsMinute for full episodes.)

Now you can hear our interview below, taped live at the Bell House. 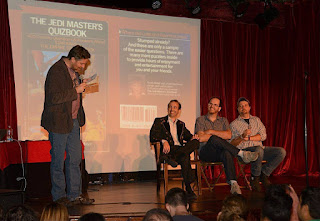 Bonus: At the end of the segment we're joined by  Noah Tarnow (host of The Big Quiz Thing) for a round of trivia, using the 1982 quiz book written by an 11-year-old boy. Play along and see if you know more than our expert panel.


ALSO: This month, Alex and Pete are co-hosting Kevin Geeks Out About Space Operas, where we look at some of our favorite STAR WARS rip-offs, along with other favorites of the sub-genre. Get tickets here.


Kevin Geeks Out About Space Operas from Kevin Maher on Vimeo. 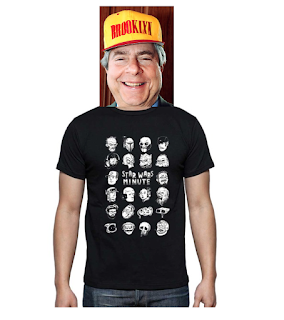 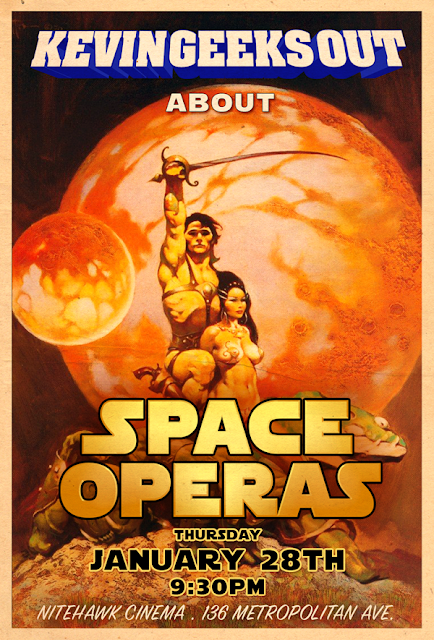 
Forget ELVIS/NIXON -- this is the movie I want to see: 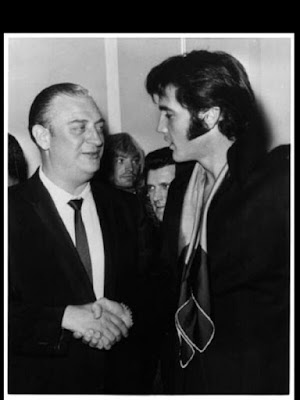 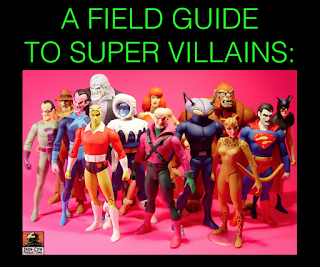 My Nerd Nite presentation on Super Villains is available in podcast form. Play it HERE

The voice matrix was created for KEVIN GEEKS OUT ABOUT SUPER VILLAINS, co-curated by Tenebrous Kate. She wasn't in this show, but I've included Kate's contributions.

Here are some visuals to enhance your listening experience: 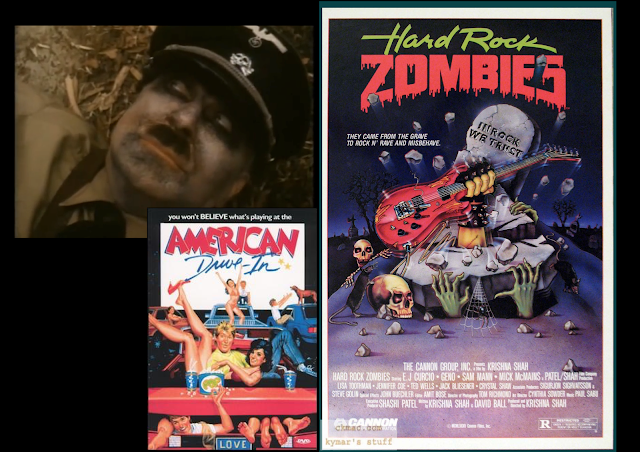 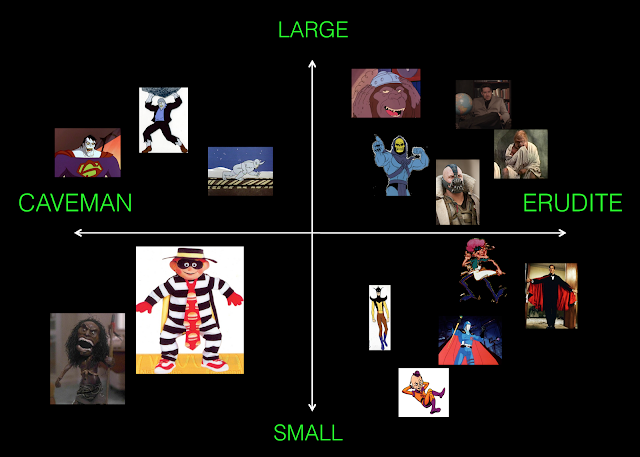 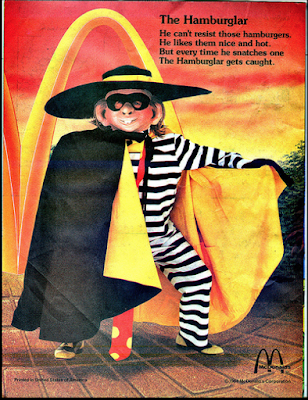 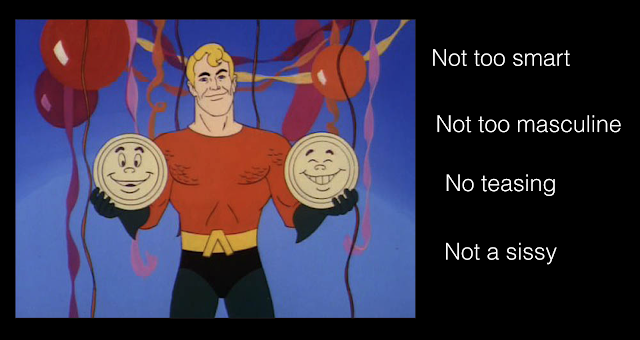 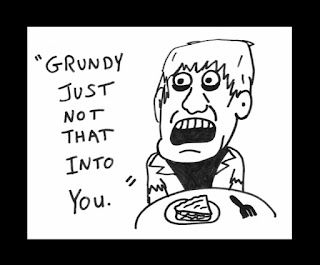 The next show is KEVIN GEEKS OUT ABOUT SPACE OPERAS, co-hosted by Pete the Retailer (from the STAR WARS MINUTE podcast.)

Kevin Geeks Out About Space Operas from Kevin Maher on Vimeo.

I was honored to be a guest on WNYC'S The Brian Lehrer Show. The topic was STAR WARS. (Fitting since my next Kevin Geeks Out show is all about Space Operas) 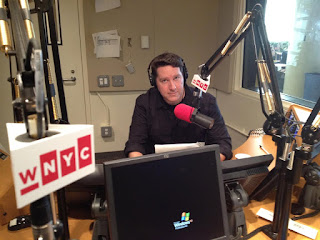 You can listen to it HERE.

When I was booked I only knew we'd be talking about STAR WARS. Because of who I am, I thought of LOTS of talking points. Here are some stray thoughts I had prepared but didn't get to use....

On the opening night of STAR WARS: THE FORCE AWAKENS I was at the Brooklyn Academy of Music with my 8-year-old son seeing a retelling of THE NUTCRACKER. It was a modern update on the classic story, different and ironic but still driven by powerful music.

THE FORCE AWAKENS is pretty much the same thing. A current retelling of a classic story. With powerful music.

And there's nothing wrong with that.

Disney is playing a long con, they will release a new STAR WARS film every year. And each year the movie will be something you can bring the kids and the grandparents to -- and everyone will have a nice time.

People criticize the new film for following the story beats of A NEW HOPE.

I'm reminded of a phrase repeated throughout BATTLESTAR GALACTICA: "All of this has happened before and will happen again."

Everyone is going through motions already repeated. (And that includes 40-year-olds complaining about a STAR WARS movie.) 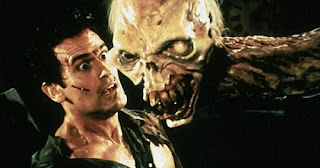 Here's a fun game: when someone criticizes THE FORCE AWAKENS for going all JURASSIC WORLD by being a beat-for-beat remake of the first film, ask if they would make the same complaint about EVIL DEAD 2. (I knew this talking point wouldn't play on NPR.)

The institution of STAR WARS is based in nostalgia. In the 1970s, following his own nostalgia story AMERICAN GRAFFITI, George Lucas had wanted to make a big-screen version of a childhood favorite: FLASH GORDON. 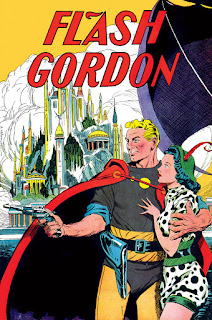 Ironically he couldn't get the rights, because another producer beat him to it. Dino DeLaurentiis had staked a claim in FLASH GORDON. (Dino had already remade another childhood favorite, the 1976 KING KONG, and was planning to produce a film version of another kiddie classic: MANDRAKE THE MAGICIAN starring Jack Nicholson.)

So Lucas created his own space opera. Despite all the spaceships and laser guns, the film was a "gee-whiz" throwback to a simpler time; decidedly unlike the morally ambiguous genre-benders of New American Cinema. While movies like ROCKY and THE BAD NEWS BEARS featured humble victories where underdogs lose but still win, STAR WARS showed the good guys winning in no uncertain terms -- by blowing up the Death Star! (Luke pretty much has an orgasm when he fires.)

At the KEVIN GEEKS OUT show we love looking at rip-offs. For every E.T. or JAWS there are anywhere from 3 to 30 copycat movies. What's most interesting to me is how many of those knock-off films copy the wrong elements. For example: JAWS rip-offs will include a big aquatic monster, without realizing that the shark is the least compelling thing about JAWS. (It's the dynamic between Hooper and Quint, or Brody's inability to fit in with the islanders, or the Mayor as a Nixon figure.) 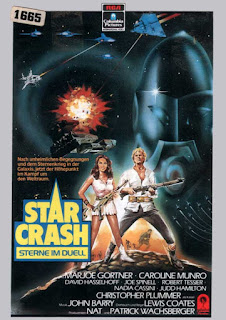 Along those same lines, most of the STAR WARS knock-offs are set in the distant future.

But STAR WARS is decidedly part of the past. The film's political landscape is not the result of any 20th century conflicts. So we can watch and feel good that whatever's taking place happened a long time ago. Whatever disagreements they had were all worked out by now. Phew!

I mention this because of the Space Nazis. 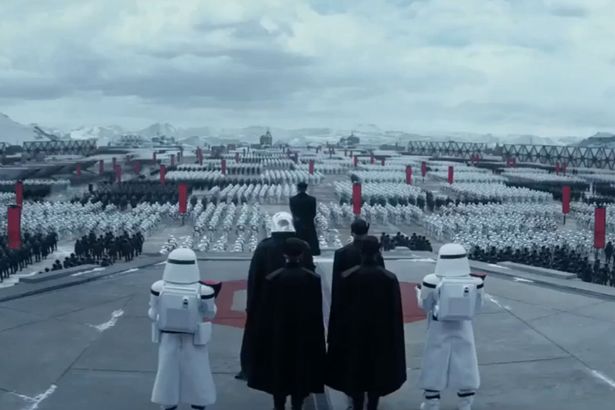 In 1977 plenty of movie-goers who recognized the symbols of Fascism because they lived through the second world war.

While making of the third Indiana Jones film, Harrison Ford told Entertainment Tonight that the villains would once again be the Nazis. Adding that they're "the best bad guys." 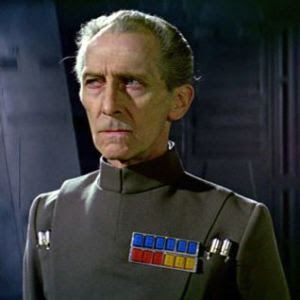 My friend Jeff says those are the perfect villains for an American movie, because the American identity is about being scrappy revolutionaries who fought against an evil British Empire.

Again, part of the nostalgia for the Revolutionary War is that Americans are underdogs.

We're cowboys and freedom fighters, not a global superpower. (See also: Roland Emmerich's INDEPENDENCE DAY. To make America the underdog you have to introduce an intergalactic mega-power.)

DON'T FEEL BAD ABOUT KILLING THEM

Another recurring theme at KEVIN GEEKS OUT show is that Hollywood loves to hates Nazis. (Especially Nazi Zombies!) In Zach Snyder's 2011 fantasy film SUCKER PUNCH a General leads his rag-tag team of sexy freedom fighters into battle against Nazi Zombies and the commander notes that
you don't have to feel bad about killing them, they're already dead. (And, y'know, they were Nazis.)

(RELATED: I just re-watched Disney's 1979 STAR WARS knock-off THE BLACK HOLE and noticed something uniquely Disney about the villains. The evil robot henchmen are revealed to be former humans who are now living as slaves of the villain. One of the good guys announces that they have to "save" them. But the know-it-all scientist declares, "It's too late. The only way to help them is to release them from their tortured state." In other words, the robot-like henchmen can't be saved. They can be killed -- but please note: killing them is releasing them from their misery, so you're doing them a favor. Only in a Disney movie can you murder the bad guys and feel good about it.) 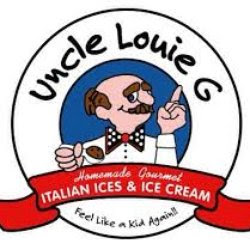 Friends of mine have praised the new STAR WARS film because it makes them "feel like a kid again."

Strange that this is the yardstick to measure art.

Is that a recent phenomena or have adult men and women always longed to feel like a child?

Hey, know who else wants to feel like a kid again?

(But seriously, who benefits from a society full of adults who need to feel like a pre-pubescent?) 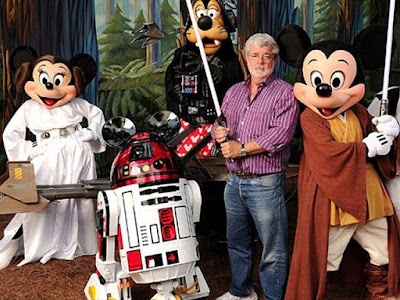 It's fitting that Disney bought the franchise, because Walt Disney and George Lucas have a lot in common. Tom Carson contributed to the book A GALAXY NOT SO FAR AWAY, connecting the dots between Lucas, Disney and Ronald Reagan. (Carson made this comparison 10 years before Disney bought STAR WARS.)


"(Lucas) is the most successful businessman-artist since Disney. Very little really matters to him except his own product, and like a good salesman, he believes in it absolutely.
Whether Lucas would find the kinship grating or gratifying (and who knows?), it's this combined know-nothingism and faith that gives him common ground with another great salesman, Ronald Reagan -- who was also, of course, a fellow storyteller. Both, in their way, urged us to become children again, and invested the condition with a moral superiority that more than made up for being uninformed. Melding tomorrow with a yesterday that never was, Lucas's invitation to the audience to return to the comforting simplicities of an earlier era of entertainment that was ideologically loaded as Reagan's summons to hark back to an earlier state of historical ignorance-as-bliss, because you can't uncritically revive the pulp narratives of another age without also replicating their values. Famously, Reagan once spoke wistfully of a time when "Americans didn't even know they had a racial problem" -- meaning, of course, white Americans, since those of color had presumably been well posted on its existence since 1492. With the possible exception of David Lynch, who's like his twin brother gone bad, Lucas may be about the whitest -- and most goyish -- American filmmaker alive, and he's always balked at admitting that the fairy tales he loves have a racial problem, too."

Still with me? I'm almost done.

I invited my wife, my parents and my kids to see THE FORCE AWAKENS.

3 generations going on Christmas night. Just like when I was a kid and we'd go to Church once a year.

Seemed fitting though, since space operas aren't just spaceships and lasers, they're about fathers and sons. (Sorry Moms. Maybe next trilogy.)

FEELINGS BEFORE THE NEW MOVIE STARTED

I doubt kids felt those things when they saw JEDI in '83. 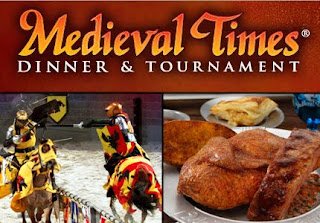 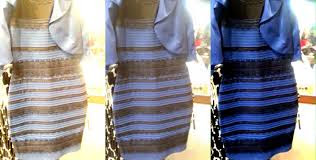 Remember that 2015 trending topic "What color is this dress?" Media analysts called it the perfect social media item because it asked YOU to weigh-in and become part of the story.

STAR WARS is similar, since you're expected to bring so much of yourself to the picture.

A lot of people preface their STAR WARS review (or anticipation) by telling you how old they were when they first saw it. They make themselves and their expectations part of the story. They don't separate their own childhood from the movie.

Is there any other franchise where that happens? Does anyone talk about the new James Bond movie by noting "I was 5 years old when I saw MOONRAKER at a Drive-In." Nope. Totally un-necessary information.

I MUST BE AN ADULT

Walking out of THE FORCE AWAKENS I didn't feel strongly one way or another.

I didn't want to gush about it as the "Best. Movie. Ever."

I didn't hate, loathe or resent it.

I was surprised that I didn't feel much one way or another.

And that's when I knew I'm an adult. 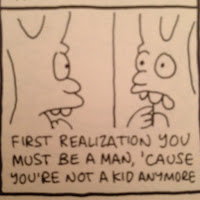 WHAT THE KID SAID

I'd brought my 8 and 10-year-old sons to the movie. Here's my 10-year-old's assessment of THE FORCE AWAKENS:


"It was better than GHOSTBUSTERS. But not as good as STAND BY ME."


(Maybe he would've liked it better if Finn and Rey had cursed and smoked.) 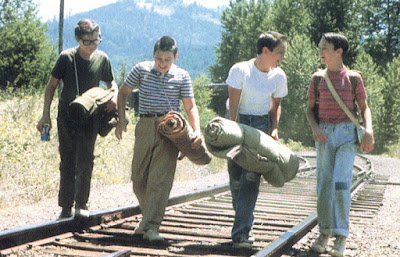 Funny that he compared STAR WARS with STAND BY ME, because so many middle-aged men look back on the original trilogy with the same longing that Gordy feels.

I guess some of us never loved a movie the way we loved STAR WARS when we were twelve. 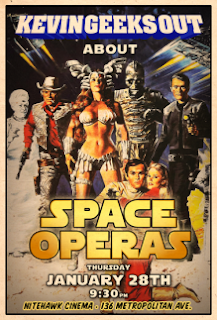 You can catch more ramblings about Space Opera at the next Kevin Geeks Out show, live at Nitehawk Cinema on January 28th. (Get tickets HERE)

Here's my podcast appearance on STAR WARS MINUTE (talking about The Empire Strikes Back) Listen HERE.

Personal essay about 12-Step, Suicide and The Star Wars Special Editions.
Posted by Kevin Maher at 10:40 AM 14 comments: